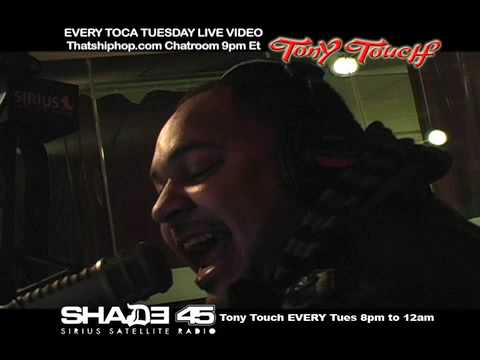 [Noreaga]
Tony Touch, Iraq, Iraq, 50 MC's...
A little bit a thugs is all it takes
to make this industry just brake *repeat*
What, what, what poison arrows
Swords and lords, yo, but really
My Mac-milly, spray niggaz, lay niggaz
Yo the Cognac, make you feel unbeatable
Yo, especially, when that ass drunk too much
I call up Tony Touch, Tony Touch bring the next dutch
Yo I'm all f**ked up, bent and can't think
While you both stink, don't even care that you sink
Yo impulsive, exclusive, high explosive
Can't even get with, shit I dealt wit
I'm on some other shit, my main script describe the foulness
Panama Canalness, what, yo, I, don't even talk so I'm far from
the loudest
Kid, nigga, can't touch this, rush this, yo what
[talking: yo, switch the beat, now, bless it]
What, I'm bout to f**k shit up, what
F**k it up *repeat 3*
F**K IT UP F**K IT UP F**K IT UP, what what!?!
We on the lines like the internet
Many will come but few was chosen
Against my set, there ain't a nigga yet
Smoke so much niggaz say I need Nicorette
You say bogie, but you used to say cigarette
Now I know, a new religion, a new beginning
I own women, three-fourths rock and linen
This Middle East shit, father beat shit
Release this, the only place in the world, that pull out cracks
pieces

We rock camels, split that ass in text
Yo we bag bitches after we f**k em and say thanks
Yo thanks for havin me, next week your straight grabbin me
Swearin they homeless, sayin that the havin me
I don't, wanna crawl at all
You wanna be a thug, you used to play ball
Runs the play for Seton Hall
Now, outta the blue, you got thug in you too
Yo I knew you, your size shoe was ?due in voodu?
Always, smell like shit, used to call you doo-doo
Never came oustide, in the crib you hide
Scared to death
While we played manhunt, to our last breath
I never chose this life, it chose me
What, LFC, heavy amount with jewelry
Crime Syndicate, nigga livin this
Never mention miss ?
Smoke rain bodies, you had to saw before, before
Yo, you on my dick, I had the lime green on
With the string on, with fatigue on
Fresh Avirex's, cockpit, now from the outlet
Jose Luis Emperor, two shots I blow ta Dillinger
No real Kings like John Dillinger, the politic
What, I'm on some ides in the militant
You either with me or against me
That in between shit make the money stop too intensely
So what the deal is, the generals what the deal is
What the deal is, the devilish thought you can't kill this
[Tony Touch: Till Capone comes home]
What niggaz, Iraq...realize that...

Other songs from Tony Touch

Other songs from Tony Touch


Freestyle Lyrics are the property of the respective artists, writers and labels. These lyrics are provided for eduacational purposes only. Please buy the song if you like them.