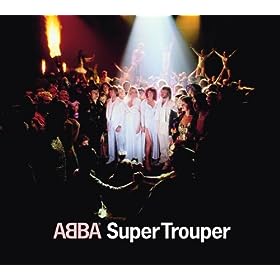 Super Trouper by ABBA is part of the album "Super Trouper (album)" and comes under the genre Pop,General. It was released on 16 Oct 2001 under the label of Universal Motown Records Group. Copyright holded by (C) Polydor Ltd. (UK).


'Super Trouper', at first called 'Blinka lilla stjärna' (the Swedish title of nursery rhyme 'Twinkle Twinkle Little Star'), was a hit single for Swedish pop group ABBA, and was the title track from their 1980 studio album 'Super Trouper', written by Benny Andersson and Björn Ulvaeus. The song, with lead vocals by Anni-Frid Lyngstad, was the last to be written & recorded for this album. 'Super Trouper' is included on the 'ABBA Gold: Greatest Hits' compilation, as well as in the 'Mamma Mia!' musical.

The name 'Super Trouper' referred to the gigantic spotlights used in stadium concerts and such. It is widely known that ABBA were not always fond of performing onstage, preferring the confines of the studio to being on tour. This is reflected in the lyrics, which, in typical ABBA style, are presented as happy and upbeat, yet tinged with an underlying hint of sadness. On 'Frida - The DVD', Lyngstad explains how she and Fältskog developed as singers, as Abba's recordings got more and more complex over the years.


Super Trouper Lyrics are the property of the respective artists, writers and labels. These lyrics are provided for eduacational purposes only. Please buy the song if you like them.